Are You a Doubting Thomas?

This is the final post in what’s turned out to be an Easter series.  I didn't plan on doing this series, but sometimes God has other plans.

On Good Friday our church presented a multi-media concert event entitled “How Could You Say No?”  It very clearly showed, without a doubt, the sacrifice that Jesus made for us, and why.

On Easter Sunday, to complete the story, we saw:

one of the soldiers
Mary Magdalen
Peter, the disciple
Cleopas (Road to Emmaus)
and finally, Thomas (AKA: doubting Thomas).

“Thomas” explained that he wanted to believe; that Jesus had actually risen from the dead after it was discovered His tomb was empty and the body was gone.  But, the truth was that he didn’t believe.  Like many people, even today, rising from the dead after 3 days seems like a crazy idea.  It’s not possible, right?  However, Thomas was curious enough to want to know more.  He said he wouldn’t believe it until he saw Jesus, Himself, standing before him showing the holes in His hands, and the wound in His side.  Thomas refused to believe until he saw it with his own eyes.  So, Jesus did exactly that.  That’s when Thomas became a believer.

So many of us are like Thomas.  The difference is that Thomas had the opportunity, much more so than we do today, to talk with the risen Lord.  He was able to see the truth for himself.  Jesus said that Thomas was blessed because he believed because he saw.  Jesus also said that those of us who believe even though we haven’t seen are even more blessed.
This led to a video that had been prepared to show people within out church family and around town giving a short testimony as to how they know, 2000 years later, that Jesus is real, alive, and that He is who He says He is.  Below is that video.  I think you will find it to be a blessing, as was the youth shadow performance, and the song “He’s Alive”.

Overall, as Christians, it’s always wonderful and awesome to see and hear the Easter message.  After all, it’s what life is all about for us.  It’s a story we never tire of hearing and gets more exciting every time.  It was also a message that could help newcomers see and hear the truth about the great love God has for us.  He loves me.  He loves you.  He knows you, even if you don’t know Him.  He loves you enough to have sacrificed His son to save your eternal soul, to make sure you will spend eternity with Him in paradise.  He loves you so much, that even if you were the only one who needed saving, He would have given the same sacrifice, suffered the same fate on the cross.

He’s waiting for you.  Talk to Him today.  It will be the most life changing conversation of your life.  The most important decision you will ever make is to ask Jesus into your heart to be the Lord and Saviour of your life.

Every once in a while a song, a performance comes along that in and of itself is a message.  This is the case with this video.  This is a performance by Lynn Dyck in our church on Easter Sunday.  The message is clear “He’s alive and I’m forgiven. Heaven’s gates are open wide”.  What else is there to say?  What else really matters?

I hope this blesses you as much as it did our church family when we watched it live.

The Easter Story Shown in Shadows! 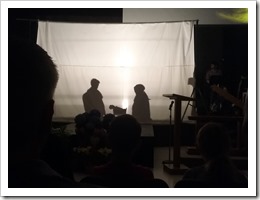 On Good Friday, our church presented a multimedia concert event.  It showed us that Jesus died for us, and left us with the question “How Could You Say No to this Man?”  Seeing the sacrifice that He gave for us leaves us without a doubt that He loves us, and our hearts should accept Him as our Lord and Saviour.  No one has ever, or will ever, make such a sacrifice, or has ever loved so greatly.

Easter Sunday, again Barrie Free Methodist Church, presented the Easter story in non-traditional methods.  This is a great way to help those who are non-believers or those who are “sitting on the fence” to experience church in a way that may not be so “scary” or “in your face” as a standard sermon.  It’s a great way of showing the hope that the Easter story has brought to us.

Among other things, that I will present in the next couple of blogs in this Easter series, this video shows the youth of our church presenting the Easter story.  I’ve said before that we are blessed with an over-abundance of incredible talent in our church family.  This includes our youth.  Among them, we have great musicians, actors, and creative talent.

Watch this video of their performance to the song “Hope’s Song” by Rebecca St. James.  It’s a sermon in and of itself… with no words spoken.

How Could You Say No to this Man? 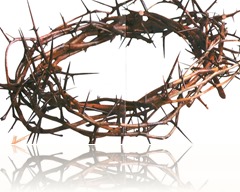 My church has a history of producing wonderful concerts that draw our church family, and others, closer to God.  We have been blessed with an abundance of incredible talent amongst our family.  There’s everyone from the stage crew to the performers, and everyone in between.  And, God has used each and every one of us individually, and as a group, to show His love for all of us.

Anyone who goes to our church will tell you that it’s a different place, we are a different people than other churches.  Neither, do we always do things according to the traditional methods.  This Easter weekend, a concert was presented on Good-Friday instead of the standard type church service.  The message behind it was loud and clear; Jesus willingly suffered and gave His life for us.  For me.  For you.  Even if you were the only one, He would have given the same sacrifice.  He loves you that much!

Here’s the video of our concert.  I recorded it myself from the audience, which I hadn’t planned on doing when I went.  There’s a little movement of the camera now and then, and heads in front of the camera, but neither hinder you from seeing the concert or accepting the message.

Happy Easter.  May this be the year you accept Jesus as your Lord and Saviour.  It is the most important decision you will ever make.