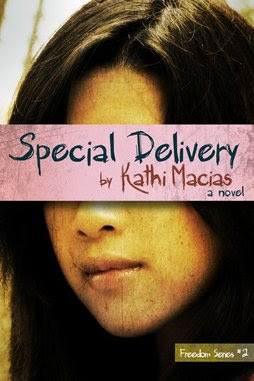 All throughout history there have been books that pop up once in a while that have contributed toward the change in how the world thinks about a particular subject.  I believe that God will use Kathi Macias’ Special Delivery, and the Freedom Series; to help in forcing the world to face an overwhelming epidemic that cannot be ignored any longer.  Kathi Macias does an absolutely incredible job of taking the reader inside the horrifying world of human trafficking and the sex slave industry.

For most of us in North America, this is a problem that is in “other places”.  I believe, the larger percentage of the population here is naive about the truth; thinking that it’s not here in Canada or the USA, the land of the free where we have privileges coming out of our ears.  The truth is that human trafficking is happening right here among us.  Children and teenagers are being held captive as forced to be sex slaves in our very own neighborhoods.

Special Delivery takes us through the lives of several young girls in America and in Thailand who are being held against their wills and forced to be sex slaves.  We experience their pain, the torture, their fear; their longings to be free, see loved ones, just to be children.  Most of all we experience their desperate need for someone to show them true love.

Then there’s Mara, who was rescued and her master put in prison, thanks to her testimony.  However, he wants revenge and even from his cell he is able to reach her.  Mara is struggling to overcome her past and live a normal life; except what is a normal life after you’ve been sold by your family and held as a sex slave for ten years?  She is afraid to let herself have hope in God, or to get close to friends, or to let real love into her life.  How does she overcome fear, mistrust, the need to close out everyone in order to feel safe?  Mara's heart longs to connect with Jonathan, but she doesn't know how to get through the pain of the past.  Jonathan's heart longs to connect with Mara, but he wonders if she could be too broken to ever have a normal relationship.

I think the part the hit me the hardest was the reality of the whole story.  It is a fictional novel; yet it isn’t.  I am not a parent, but I had a very difficult time reading about these girls who were between ten and fourteen.  I cried at times realizing that there are so many precious children who are suffering this fate in the world today.  Part of the plot takes place in the midst of San Diego with scenes in a regular diner much like any where have all sat and eaten many times.  One of the slave owners in Special Delivery would take one of the girls to this diner for food.  To the rest of the world they appeared to be an overbearing father and a shy or rebellious teenager.  If you saw a couple like that, you wouldn’t likely take a second look.  You would believe it to be like any other sight you’ve seen a thousand times before in a coffee shop or a mall.  For the slave owner, this father / daughter story is just a cover.  He wasn’t the father, and the girl wasn’t shy or rebellious; she was a slave who was filled with so much extreme fear of her master that she didn’t dare look at others, let alone talk or interact with anyone.  If she did, she knew the fate that awaited her back at the brothel.

These scenes made me realize how real this is even here in our own North American society.  This diner on the beach of San Diego could have been any diner in my own city.  It is here among us.  This horror is real.  Children are suffering.  Society must be made aware, and action must be taken to stop it.  Each and every single one of us must do our part.  The light and hope in this story came from the fact that we saw how God worked through every person’s life.  Each and every child is special to Him, and He never leaves us.  We can see all through the novel how God’s wonders always overcome.  Hope is always present and there is nothing that His power cannot conquer.  Special Delivery and the Freedom Series, will help to open the eyes of society to this epidemic that can no longer swept under the rug.
Author Interview


Special Delivery is book two in the Freedom (human trafficking) series. For anyone who may not have read book one, Deliver Me From Evil, can you fill us in on the focus of the series in general, and Special Delivery in particular?
The Freedom series is a three-book fiction series built around the horrifying topic of human trafficking. People often ask me why I decided to write about such a dark topic. First, I explain that I’m not writing about a dark topic; I’m writing about the Light that shines in that darkness. And second, I believe the Church should be at the forefront of the modern-day abolition movement to set the captives (modern-day slaves) free. The three books in this series specifically follows the life of a young woman named Mara, who was sold into sexual slavery by her own parents in Mexico, and then smuggled across the border into San Diego by her uncle who then served as her pimp. A strong sub-plot throughout the series tells of two sisters in the Golden Triangle of Thailand, Chanthra and Lawan, who are also trapped in a brothel. Finally, a teenage girl named Francesca, kidnapped in Juarez, Mexico, and forced into prostitution, is introduced in book two. Special Delivery picks up two years after book one, Deliver Me From Evil, ends, and continues with the stories of Mara and Lawan, as well as others carried over from book one. Mara hopes she is finally free to pursue her own life because she was rescued from the brothel and her testimony helped lock up her uncle for life. But the man has underground connections and is driven by revenge to reach out from behind bars and deliver the ultimate punishment to his niece.

This isn’t the first fiction series you’ve written on nationwide and even worldwide social issues, the one previous to this being the persecuted Church. What draws you to these difficult topics?
As a Christian, I believe I am compelled to use my God-given gifts to honor God in all I do—and that includes exposing the deeds of darkness, calling sinners to repentance, and taking a stand for righteousness by doing all I can to help rescue those who are suffering. I dare not turn my back on “the least of these.” I also believe that God placed this sort of burden on my heart even before I became a Christian at the age of 26. I’ve always been a champion of the underdog, a “soap-box” preacher, if you will. When I met Jesus, I simply redirected that passion toward His people, realizing I couldn’t effect real change in my own strength anyway.

With your obvious passion to right social and moral wrongs through the power of the Gospel, how did writing and speaking enter into that?
I’ve known I wanted to be a writer since I was a child—never wanted to do anything else. When I was a teenager I told my then boyfriend (now husband) that I was going to be a writer one day. What a blessing that God allowed me to fulfill that dream! After becoming a believer and growing in my faith, it was natural to take my passion to fight for others and incorporate it into my writing. Speaking, on the other hand, was an entirely different story. I was terrified of public speaking when I was young, and the day I received Christ I made a “bargain” with God, promising to do anything He asked of me—so long as it didn’t include public speaking. (Does God have a sense of humor or what???) Now, when I stand in front of audiences where I believe God has called me to speak (and actually find myself enjoying it!), I tell my listeners that if God has called them to do something and they feel it’s impossible, they can consider me their “visual aid” that NOTHING is impossible with God IF we will simply take that first step of obedience and let Him fulfill His purpose in and through us.

With the topics of the worldwide persecuted Church and human trafficking under your belt, what other issues are you dealing with in your writing?
My Christmas 2011 book, A Christmas Journey Home, dealt with the immigration/border problem, and my Christmas 2012 novel, Unexpected Christmas Hero, will be about homelessness in America. The next issues-related fiction series I have on tap—which I am just starting to write, by the way—is called the “Patches of Courage” series and will begin releasing in late January 2013. Book one is The Moses Quilt, based on the life of Harriet Tubman, and will be followed by The Christmas Quilt and The Impossible Quilt. This series of books will highlight historical American women whose Christian faith enabled them to walk in great courage and make a difference in the lives of countless people.

Where can people find out about you and your books/speaking/appearances?
They can go directly to my website (www.kathimacias.com or www.boldfiction.com) or my Easy Writer blog: http://kathieasywritermacias.blogspot.com. I’m also on Facebook, Twitter, Pinterest, Google, and various other social sites. Would love to hear from all of you!

Where can people find out about free book giveaways on this blog tour?
The blog tour host is giving away a set of two books from the Freedom Series -  Book 1 (Deliver Me From Evil) and Book 2 (Special Delivery). Also, readers can follow @ChristianSpkrs on Twitter or follow on Facebook at http://www.facebook.com/CSSVBT.TheFreedomSeries for more book giveaway locations on the tour.


I was given a complimentary copy of this book from the author in exchange for posting the author’s interview on my blog. This blog tour is managed by Christian Speakers Services (http://ChristianSpeakersServices.com). 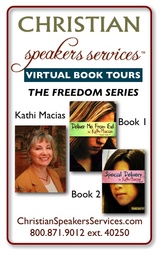