BOOK REVIEW and AUTHOR INTERVIEW: Deliver Me From Evil 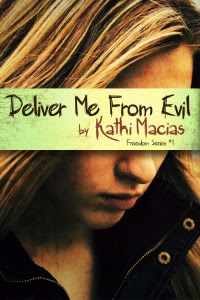 Deliver Me From Evil

After reading and reviewing Special Delivery (Freedom Series, book 2), I just had to go back and read book one.

As I went back and read the history of the characters that I had grown attached to in Special Delivery, I found myself wishing I could reach out and hold them; or maybe even warn them of what their future held.  In Deliver Me From Evil, I read about a younger Mara and how she was sold into the sex slave industry by her parents who had no use for her simply because she was a girl.  Being part of Mara’s life and the lives of other victims in Thailand and America made me want to hold those young ones that are close to me in my own life and never let them go.

Then there’s the Flannery’s, a wonderful Christian family who God has called to help and minister to those caught up in the horror of human trafficking.  Young Jonathan Flannery was the one that Mara’s heart seemed to have a longing for after a chance encounter, though she didn’t dare hope for something wonderful.  She knew how men really are; none of them have good or pure hearts.  Jonathan also noticed Mara, and thought he would never see her again.  It was their run in together though that spoke to his heart leading him not only to Christ, but to a passion for ministry to help sex slave victims that he knew he didn’t ever want to let go of.  In the end Mara and her brothel mates were freed, and their owner jailed, thanks to Jonathan’s bravery in a very gripping rescue operation.

Through it all Kathi Macias shows us how God is part of every detail in our lives, even when we are not able to see it;  He puts people in place around us to assist in bring us to Himself, and good things into our lives.

The more I read about this terrible crime, the more my heart goes out to those who are caught in it.  We know that victims are mere children who are longing for unconditional love, the pain and abuse to stop, and to go home to their parents.  However, I realized that even the criminals that run this industry often feel trapped.  These thugs also feel, sometimes, as though there are no other options for them outside of this line of work.  They have bosses that will take severe revenge in ways the rest of us can’t fathom if they don’t obey and act exactly to demands issued.

Human trafficking needs to be brought to the forefront of our media, and it needs to stay there for as long as it takes abolishment to happen.  It needs to be put in front of every individual in North America; and around the world.  It cannot be stressed strongly enough that this kind of abuse is not acceptable in any form.  Those who reach out for the service to keep it going are among the most evil of individuals in this offence.  I think we could save the victims by shutting down the industry; which would happen if there were no customers asking for the service... which could happen if such activity was associated with the extreme shame that deserves to be associated with it.  The victims need all of us to do our part.  Criminals need to be jailed, and customers need to be eliminated.  Do your part by talking about it, share stories, reach out to ministries and organizations who are fighting to make a difference; and above all make the customers feel the shame they deserve to feel.

How did you come up with the idea for Deliver Me From Evil and the Freedom series?

It actually came out of a phone conversation with Andrea Mullins, the publisher at New Hope. We were discussing the Extreme Devotion series (about the persecuted Church), which I was still working on at the time, and we began to consider topics for a second series. Andrea was the one who suggested human trafficking, and it really struck a chord with me. The more I researched it and worked on the proposal, the more excited I became about joining forces with others working to abolish modern-day slavery, which is exactly what human trafficking is.

What was your favorite scene to write in Deliver Me From Evil?

This book/series has been the most difficult I’ve ever written, simply because the subject matter is so dark and heavy. More than once I had to walk away and clear my thoughts before moving on from one scene to another. But interspersed between the heartache and tragedy are several lighter scenes (written and incorporated into the book out of necessity), dealing with a pastor’s family and their Bible college-bound son who inadvertently discovers the human trafficking ring and becomes involved in the heroic and dramatic rescue attempt. Any scenes revolving around the absolutely functional and loving life of the Flannery family are my favorites.

What was the most difficult scene, and why?

There were many difficult scenes in this book due to the subject matter, but the hardest had to be when the main character, 18-year-old Mara, realizes that one of the younger girls is being tortured and killed in an effort to extract information and punish her. Though the actual violence is done offstage, Mara experiences each blow and muffled scream, as does the reader.

Did you always know you wanted to be a writer? If not, how did you catch the writing bug?

Oh yes, I never wanted to be anything else. From the time I discovered the power and allure of words, I was hooked! I was an avid reader before I started kindergarten. A short story I wrote in the third grade was turned into a play for the entire PTA, and I won all sorts of awards for poetry in high school. I even told my then boyfriend (now husband) Al when we were in our early teens that I was going to be a writer one day.

How do you go about writing your fiction books? Which comes first for you, plot, characters, and/or theme?

I usually get what I call “a niggling in my soul,” which eventually emerges into the very basic theme of the book. I hate outlining and writing proposals because I do NOT develop plots or even characters ahead of time. I start with a couple of main characters, a starting and ending point for my story, and just let the rest unfold as I go. I know. We’re not supposed to do it that way, but it works for me, and I so enjoy the surprises as the story develops and my characters take over. So much fun! So long as they don’t try to lead me away from my pre-determined ending. Then I have to reign them back in a bit.

How do you get your ideas for your books?

I have ideas coming out of my ears! I am a seriously addictive idea person. You want ideas? You can have my overflow! My challenge is to figure out which ones are worth pursuing. Not every cute or fun or even meaningful idea that pops into our head is meant to be a book. I pray, think, study, bounce them off people, etc., before committing to moving ahead with one of them. For the most part, however, nearly all my book ideas are, to one degree or another, born out of some moral or social issue that I care about.

How can we find out more about you, The Freedom Series, and other books you are writing?

Deliver Me From Evil promo video